I WAS BORN in Wallace, Idaho and moved to Great Falls, Montana when I was six months old. In Great Falls, I went to Lewis & Clark Elementary School, became a Camp Fire Girl and learned to snow ski. All very American, you might say.

When I was 12, I moved with part of my large family to New South Wales, Australia. A retired dentist, my father intended to research and study Aborigines and islanders in the Southern Hemisphere regarding the connection between nutrition and dental health.

That reason for moving to a strange, faraway land was way too abstract for 12-year-old me. All I knew before we departed familiar shores on the S.S. Orsova was that we stood a fair chance of encountering kangaroos, half-naked men with spears and “Cola bears.”

This was 1972 and my sixth grade teacher at Lewis & Clark did not have much knowledge to add to our scant concept of the Land Down Under. It was still many years before Paul Hogan would popularize Australia and bring it to the attention of Americans.

Even though Australia is a Westernized country, it was definitely a cultural transition. After about a year, my family stopped whinging* about why Australians didn’t do things the way we did them back home. Once I got over my American arrogance, I fell in love with the country and stayed for 25 years.

Perhaps as a result of being moved to a foreign country at a tender age, I’ve always been one to move around a lot. I lived in Woolgoolga (affectionately known as Whoopie) and went to high school in nearby Coffs Harbour in the state of New South Wales (NSW), both tourist towns on the South Pacific Ocean flanked by banana plantations. At age 19, to get away from home, I worked in a caravan park (trailer park) in Airlie Beach, Queensland with the Great Barrier Reef offshore. When my now-adult daughter Bonnie was a baby and toddler, I lived in Dee Why, a beach suburb of Sydney.

With my (now ex) husband, Shane, a store manager for Big W (the Australian version of Wal-Mart), I moved to Darwin in the Northern Territory—a looong way from anywhere and a shock to the system with its tropical climate. Darwin has beaches, but you don’t go swimming unless you like saltwater crocodiles (up to 18 feet in length) and deadly stone fish.

My most favorite place, of the many places I lived during my 25 years in Australia, was Leura in the Blue Mountains, two hours west of Sydney. In Leura I lived only a few kilometres from the famous Three Sisters rock formation. I’d love to live in the Blue Mountains again some day.

Finally, before moving back to the USA in 1997, I lived in the Dandenong Ranges on the outskirts of Melbourne, Victoria. In the Dandenongs, I lived at the bottom of a lane so steep most delivery trucks would not agree to go down there. A newly single mom, I didn’t own a car at the time, so every excursion (including getting to work) involved a heart-pumping climb to the top. Bringing in groceries and firewood was always an event.

When I moved back to the States I spent a year in Seaside, Oregon (where my mom lived) before moving to Taos, New Mexico for seven years. Taos is funky and colorful and an inspiring place for creative people—that’s where I wrote my book, Fear of Writing.

From Taos, my (now former) long-time boyfriend Brian and I moved to Canyon Lake, Texas for a couple of years. Not being able to afford the mortgage on our adorable but over-priced little house moved us on to Jackson, Mississippi, where Brian took up a new career opportunity as a Radio Frequency engineer designing a special antenna. We survived a tornado in Jackson that took the roof off a house only a few doors up from our condo. Not one of my favorite places.

In 2008, Brian was offered a job by his best friend from college and we moved to Youngstown, Ohio in September of that year. Four years of living in a state that gets very little sunshine was not my idea of an adventure. In February 2013 I moved back to New Mexico. Hoorah.

I guess with all this moving around it was inevitable I would eventually cultivate an interest in travel writing. But now, when it comes time to tell you about my journey with Fear of Writing, I find that my bio is already way too long! Perhaps I’ll write an e-book about it some day.

Suffice to say I’m always stimulated to work with the wonderful writers and closet writers who come my way. This work satisfies parts of my personality I would not be able to express elsewhere. As a double Aquarian, I love finding ways to provide inspiration with a delivery you might not find in more traditional settings. I hope you’ll agree that my offerings are unique.

*Whinge rhymes with hinge and means “whine,” but with an Australian flavor that cannot be translated in mere words. You’d have to experience it first-hand. 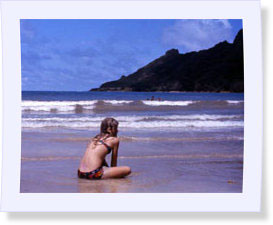